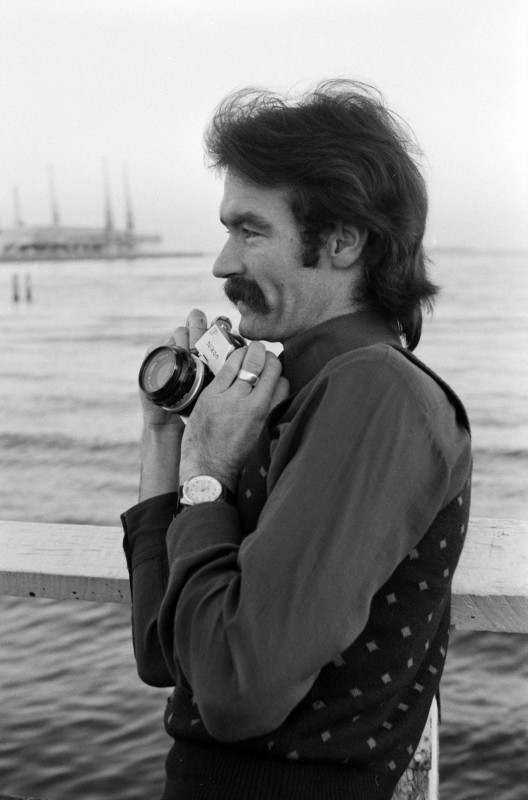 I met Bruno and Hazel Benini by chance. I was an amateur photographer who had a friend working for Bruno. I was employed near the city and accepted an invitation to meet Bruno & Hazel one Friday evening. It was my introduction to fashion photography as I ascended the stairs to their first-floor studio at 26 McKillop Street Melbourne.

The walls of Bruno’s studio were covered with his latest fashion images and portraits of very interesting people. I was about to meet a photographer with style, grace, and personality. Friday night became a regular event for me. Stuart, Bruno’s assistant and I spent time in the darkroom with Bruno keeping an interested eye on the prints we made.

One evening in 1970 Bruno suggested I enter a photo competition called “The Age of Aquarius” sponsored by Ilford Australia. He had received an invitation and thought it would be good for me to get involved. I think Bruno was trying to show me that photography was whatever you imagined in your mind’s eye and the subject ‘The Age of Aquarius’ was just that - an open brief. I accepted the challenge and produced a set of images that made it to the finals (10 photographers) First prize was a return trip to London and was awarded to Paul Cox (the acclaimed photographer/cinematographer).

Bruno was convinced I had a career in the medium and encouraged me to consider studying at one of the 2 photo schools in Australia at that time. Both were in Melbourne, RMIT, and Prahran College of Advanced Education. I eventually got an appointment with the lecturers at Prahran including Paul Cox.  On the strength of my placement in the Ilford competition I was accepted at Prahran and began studies the following semester.

During my 3 years at Prahran I assisted Bruno when time allowed and gained the sort of knowledge other students were envious of. The idea of a mentor in those days was not commonplace, I was fortunate. 1973 was my final year at Prahran and I had realised I was not suited to the world of fashion. I loved the outdoors and my first job was on a weekly Melbourne newspaper ‘Southern Cross’. After work Bruno, Hazel and I met regularly at the studio. The bond had been cemented by their generosity and our love of photography.

My time at the newspaper confirmed my direction in photography and I decided to concentrate on working in the editorial market specializing in geographic subjects. In 1976, I moved to Sydney; it was where the majority of magazine and book publishers were located and it was the obvious place for me. This was a difficult decision; I was leaving my immediate family and my adopted family the Benini’s.

On my regular visits to Melbourne Bruno, Hazel and I would catch up and in the late 90s our conversation turned to Bruno exhibiting a collection of his photographs. The opportunity came along in 1999 in a retrospective exhibition, part of Melbourne Fashion Week. Bruno and Hazel worked tirelessly to choose the images and supervise the printing. I attended the opening night at RMIT Gallery in Melbourne. It was a packed house with Maggie Tabberer AM opening the exhibition. Melbourne’s fashion establishment and many others made it an inspiring night. Bruno’s time had come and with his usual style and humility he accepted the accolades with his beaming smile and gentle nature. Later that evening a group including some of Bruno’s favourite models celebrated at Sillitto’s Garden Restaurant. The late Rennie Ellis, forever a man of the moment turned up to capture this special event.

Bruno’s fashion archive is unique. From the very beginning of his career he managed his negatives and catalogued every assignment he undertook.

The legacy is that today Bruno’s archive held by the Powerhouse Museum is possibly the most complete record of Australian fashion by one photographer available for research and display. It spans almost 50 years of the working life of Bruno Benini.

Sadly, on the 3rd of October 2021 my dear friend Hazel passed away. Her death notice appeared in the Melbourne Age 4th on the of October written by close friends.

“Our much-loved friend Hazel Benini (nee Craig, b 24 March 1930) passed away peacefully at 10am today, Sunday October 3 2021, at Caritas Christi, Kew. We are saddened by the loss of this indomitable, bright, witty and talented woman, a beloved friend and inspiration to many including us.

Hazel was an accomplished commercial artist in her own right, as well as the life and business partner of her late husband, the renowned fashion photographer Bruno Benini (d. 2001). Her resilience enabled her to bounce back from successive lockdowns and celebrate a joyous 90th birthday party with close friends this March, a few days before she turned 91”

Hazel's life will be celebrated in style with her dearest friends once conditions allow ~ Di & Mike, Rod & Derek.